Boy In Trouble – Gateway To Civilization 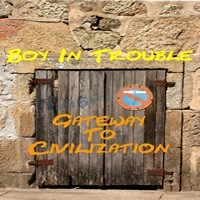 Boy In Trouble – Gateway To Civilization

Boy In Trouble put the bite in the Gateway to Civilization. Major kudos to Zero V and G for creating BIT’s most accessible works. Until 2005, the group’s scant material had been nearly impossible to find.

This release features their new trademark ’78 Caddy. Like the remainder of their songs, it features the three “R”s: rhythm, raw, and relaxation.

But arguably their best moment is “Strollers” with its 80s electro sound, post-dub bass, narrative/old school samples and blues guitar. It sounds like they put everything that was left after a night of recording sessions in a blender and thought; “What the hell, let’s release this!”.

It’s that sort of sprited, unconscious hybrid that makes BIT so unique.