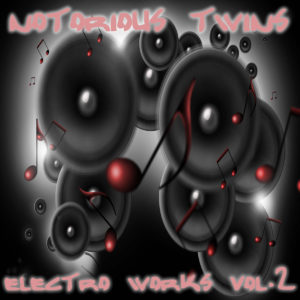 An EP with 4 tracks. A result of numerous recording sessions during the period 2005 – 2009. Although it’s quite a timespan, the tracks have alltogether a coherent sound.

The music is electro based.

The song that kicks off the EP, Block Land, is more disco based than most of the tracks in this series of 4 EP’s. A typical 80s drum with a detuned bass, layers of pads and sparse percussion make this a Notorious Twins trademark.

Retrofit is a song where the guys have tried to capture the electro sounds of the past, to create a new song which they did.

The third song is a firm favourite of the guys. Disco 2 Disco is a track where the ages of disco pop up again. Leaning on a heavy drum and bass combination with use of a vocoder and some synths, tweaked and detuned.

The last song on this EP is a demo track. It shows how sounds and ideas come together, eventually to end up into something you could call a song. Obviously not finished, but captured during recording sessions with Boy In Trouble.

This is number two is a series of 4.

All tracks are written, played and produced by the Notorious Twins.

7 Bandits – in retrospective: the silent ones
Scroll naar bovenzijde