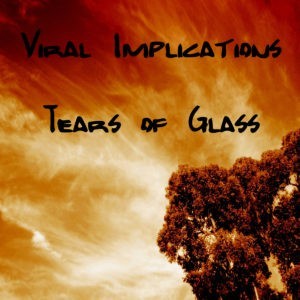 A new release by Viral Implications. It’s called ‘Tears Of Glass’. The EP has five songs on it.

It kicks of with ‘The Beauty of Sinus’, a five minute piece of work. More up-tempo than the previous songs of Viral Implications. I was looking for a much more warmer sound in the music. A repetitive drum pattern with use of a synthesizer. Drums were programmed in the application Battery (finally figured out how to create my own midi files). This first song is a good example of the sound I was looking for on this EP.

The second song is called ‘Virality’ and hints more at the previous work of Viral Implications. Like most of the songs on this EP ‘Vitality’ quietly moves on.

The title track of this EP ‘Tears Of Glass’ consists of two loops; drum loop and a 303 loop. It has two major breaks, exploring a totally different ground, but it still fits together. It was the second track I recorded (after the midi thing). Although the rough version was recorded in about three hours, it took me another month to finish it. One of the samples I’ve used in this song was called ‘Glass’, which originally was the working title of the song. For some reason it got changed into ‘Tears of Glass’.

The fourth song ‘A Homeless Farewell’ is one of those songs that just erupts from a recording session. Base track with the drums and bass were on my harddrive. I started to fiddle with some guitars and added strings. It gave its nostalgic feel. Like Arjen says: “a typical autumn song”. This one builts up to its climax at the end. I really love this one.

The last song is a bit out of tune with the other ones. Which has become kinda like a trademark for me, over the past few years. A track that I wanted to use for Zero V’s ‘Conflict of Emotions’, but too loud for that EP. I still wonder which turn I took from the original jazzy demo of this song ;-)