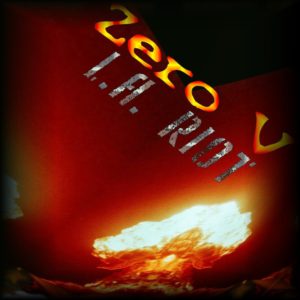 After an album and a few EPs of baffling, mood and style swings, Zero V is definitely due for a change. Zero V has never turned in a substandard production.

Something less than a radical reinvention, L.A. Riot does return the man to the more inviting climes of past masterpieces like Twinkling (if not Heaven).

The record is immediately more back to his roots than his last one Nameless, with less focus on his trademarked random-beat-making software.

A few melodies, suitably obtuse and wispy, creep in as well. “Phoenix” is an excellent production, somehow spacious and claustrophobic at the same time, with stuttered percussion and a beat pounding away in the background.

“Aqaurian” and “Gamma Ray” also have glimpses of a repetitive beat, even if the usual recycle bin of samples and distorted instruments noise nearly overwhelms them near the end.

The 30-minute “L.A. Riot [The LAPD Tapes] is an epic of deliciously chilly rhythms and soundscapes, though the usual Zero V sounds madness could’ve used a timeout.

Most importantly, though, he has pulled away from the brink; no one ever doubted that Zero V was at the extreme of experimental music for its own sake, but given a record like L.A. Riot, listeners might actually return for multiple listens.