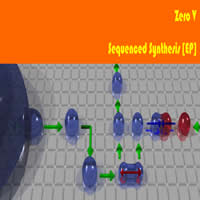 Zero V’s latest work. Completely different from his last epic album “Songs of Parting”, he now heads for the dancefloor. Although all the songs have Zero V’s twist – what is going on in this man’s mind? – it is definitely his most transparant album to date.

It starts of with a tongue in cheek song, where Girly, Nathalia and the man himself are caught on tape while discussing a few things in a bar (as it seems…). This song, entitled “Intro (Gossip Mix)”, started of with the working title “Rumours”. But then again Zero V never choses the obvious! Ekim is heavy (no pun intended…) involved on this track, since he’s the one who controls the agenda of Girly and Nathalia.

The second song starts where Boy In Trouble’s Atmospherics ended, a drone and weird samples, gradually emerging into a Brazillian sounding song. Excuse me, Braziliian?
Yes, yes Brazillian, and no not something you would grasp easily, somehow he managed to put his Dreambox 12 into it and some other sounds.

The Interlude; this guy loves interludes. Makes us – at ON-Mix – wonder when he’s gonna release an album just with interludes?

The Synthesis song starts quite normal. Bit heavy on the distortion perhaps, but still okay. It quickly steps into a sound with a heavy distorted guitar, some acid sounds, etc.

QLoop12, is a song that just didn’t fit in elsewhere. Strangly it fits perfectly with the other songs of this album. This songs consists of a few repeating loops; sometimes it pays off to take the short cut.