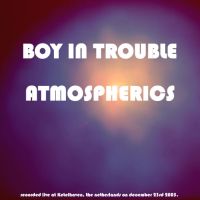 Live recorded at The Garage, Ketelhaven, The Netherlands

Due to or – better yet – thanks to a rotten tape, Boy In Trouble was put back into gear. The entire 1991 album had to be done again. While Henk is still working on the Metamorphosis project, together with some musical friends. He decided that re-recording the album would be a hell of a job. Even when we consider that part of the samples, which Henk used at the time, where not available anymore.

Thus there was the decision to record a live album. A one off gig of the reïncarnation of Boy In Trouble.

During several weeks the ON-Mix crew was able to keep it a mystery.  Is Boy In Trouble a band or just one person?

The album, again entitled; Atmospherics, was recorded live and at the same time broadcasted through the internet. The boys were able to capture the sound that made Boy In Trouble unique in the 90s, they added a bit of this new century’s flavour and there it was: Atmospherics 2005.

During rehearsals they played around with a few of Zero V’s songs, one eventually ended up in the live performance; The Journeyman Joiner.

The album consists of 4 instrumental songs and is produced by Zero V.